After graduating from Peking Union Medical College with a Bachelor of Nursing and working for International SOS in Beijing, Jie Huang decided it was time to broaden her horizons and extend her nursing knowledge. 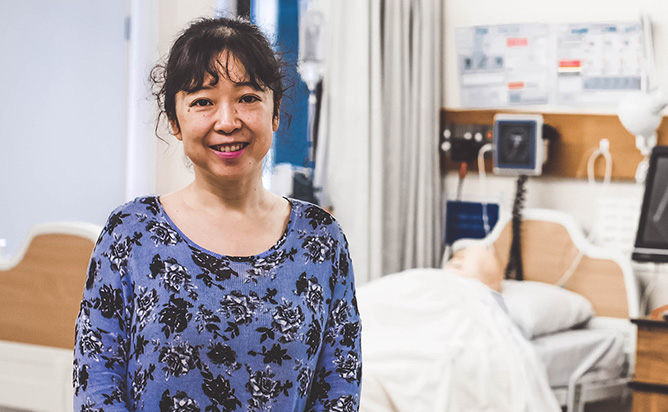 It was a decision that took her all the way to New Zealand to study a Graduate Diploma in Nursing at Ara Institute of Canterbury.

“I was eager to go abroad to study and New Zealand is regarded as one of the safest countries in the world,” Jei says. “More importantly, nursing education there is advanced. I’d heard from friends who are registered nurses in New Zealand that Ara is the institute with the best reputation. Also it is relatively cheap compared to other institutions and universities.”

Specifically designed for international nurses, the graduate diploma at Ara was the perfect study option for Jie. “As an overseas-trained nurse I was unfamiliar with the healthcare systems of New Zealand and there are lots of differences between New Zealand and China in terms of nursing care. I’ve been able to learn from local nurses about different nursing specialities and their experiences of looking after patients and I’ve also improved my English which has given me a lot of confidence.”

The teaching style at Ara is quite different to the style Jie was used to in China. “In China the emphasis is on lectures, so you’re more dependent on your teachers’ opinions about nursing and patient care. At Ara, you’re encouraged to proactively think and give your own ideas, based on evidence, case studies and group discussions. It improves your ability to independently solve medical problems and you learn to be self-disciplined.”

At Ara, Jie has been able to choose from a wide range of papers to suit her chosen nursing speciality. “For example, I chose lots of papers related to cardiac nursing and aged care, which has helped me lay a strong professional foundation.”

Her studies have also included a Competency Assessment Programme that involved a six-week placement in a public hospital. “This was the part I enjoyed the most. It gave me the chance to observe, learn and update my nursing skills and get used to real clinical environments in New Zealand. I learned a lot.”

Jie has enjoyed living and studying in Christchurch so much that she’s decided to seek employment locally once she graduates. “The people are very nice, easy going and friendly. Christchurch is a quiet and beautiful city with lots of parks for relaxing. It’s just like paradise.”