What do an autonomous vehicle, an aerodynamic modified race car and a soil test using drilling rigs have in common?

They are all student projects, which won awards at the Engineering Showcase, held at Ara Institute of Canterbury last night.

The annual Ara Engineering Showcase celebrates the final-year Bachelor of Engineering Technology students’ capstone projects. Each student is required to dedicate up to 300 hours to tackling a real world problem and solving it to the best of their ability, often alongside an industry sponsor.

The Industry Choice winner, and winner of the Best Electrical Engineering Project, was Ray Jenkins who enrolled to study the Bachelor of Engineering Technology following a 16-year career as an electrician. Applying his passions for technical systems, electronic and electromechanical design, Jenkins spent 800+ hours, far exceeding tutor expectations, to build a four-wheeled direct drive vehicle named the wayfarer.

“My project is a ground-up design and build of an unmanned ground vehicle that will provide a platform for further research and design of autonomous control systems… Wayfarer is currently capable of basic autonomous navigation to find its way home, using ultrasonic sensors for object avoidance.”

The award for Best Mechanical Engineering Project went to Daniel Brown for his project Race Car Aerodynamics Optimisation, which he worked on with client Ben Coffin, from Battery Masta.

“My project is primarily based around a newly built endurance race car,” Brown says. “My project is defined as design, develop and implement aerodynamic modifications onto the race car with the objective of increasing downforce and decreasing drag.”

By manipulating airflow Brown was able to utilise specific design features to result in improved overall aerodynamic performance and reduced drag on the race car.

Dr Thomas Cronje, Project Course Coordinator within the Ara Department of Engineering and Architectural Studies says that the Showcase is “a springboard for our best projects and students”. Since the showcases’ inception two years ago, many of the students involved have gone on to win national titles- last year’s Industry Choice Award winner, Dinh Van Nguyen was awarded 2018 Student Innovator of the Year from Engineering New Zealand.

The Engineering Showcase will be open to the public on 15, 19 and 20 November from 9am-4pm in Kahukura Building, Ara City Campus, Madras Street. 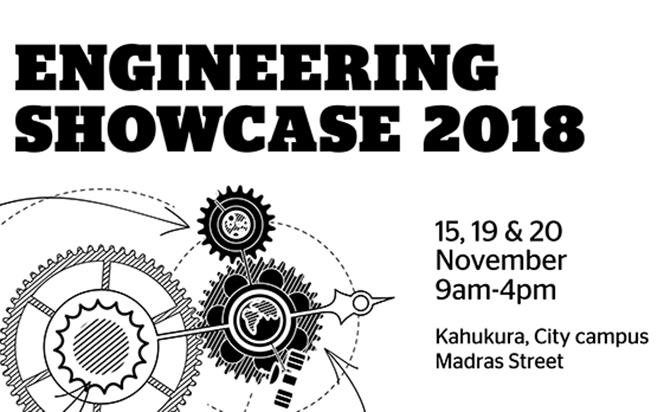