Ara Institute of Canterbury Ltd. is delivering real-world opportunities for students to demonstrate innovative thinking even while the country is barely emerging from its struggle with COVID-19.

The two winning entries for University of Canterbury’s recent UCE ‘Digital Doctors’ challenge both had strong connections to Ara. One team was entirely made up of students completing Ara and UC’s joint Bachelor of Nursing (BN)/Masters of Health Sciences Professional Practice (MHSPP), and the other featured Ara Bachelor of Nursing student Kim Buckley. Anna Richardson, Ara’s Bachelor of Nursing Programme Leader and Year two and three Student Coordinator is naturally pleased, saying “We do have lots of examples of innovation and creativity going on in our Department at present.”

The online challenge, held over 48 hours during the weekend starting May the 15th, is part of the University’s innovation incubator UCE and its ‘Disrupt’ series. The task was to find novel ways to incorporate futuristic technologies into medical practice and the forum attracted a number of talented teams, all of whom saw the value in both the exercise and the chance to learn from the professionals who were overseeing the projects and acting as mentors. Nursing student Kim Buckley was, for one, highly motivated by the challenge, saying “ ‘Digital Doctors’ was an extraordinary opportunity for students of all backgrounds to work together to re-imagine the future of general practice.” Entrants also had the chance to win a $2,500 cash prize and ongoing support from UCE experts aimed at bringing the winning ideas to fruition.

He sees potential for these kinds of service-delivery devices to improve wellbeing for patients and optimize the use of doctors’ time. “People want to be well - if we made access to health monitoring more convenient, it could hopefully help more people to stay well for longer, and prevent sudden increases in the need for medical help.”

Commenting on his studies, Gareth says that they prioritise a holistic approach to medical practice and encourage critical thinking, both of which were put to use while he worked upon the team’s winning entry. “I’m concerned with social utility and addressing inequalities of access that prevail within the NZ health system, even though there is a free public health system. For example, primary healthcare might be open from eight to five, but even with extended hours, this doesn't always fit with shift work; people might have to then wait for their partner to come home before they can go out and so on. Right now, the richest of the population can afford this sort of technology but I’d like to see it made accessible to those at the other end of the social gradient as well.”

The ‘Medsolve’ team’s Home Health Hub was also conceived to address problems of access and connection, and was described as a way to ‘take your GP home’. The portable touch-screen-based technology incorporates touch and voice-activated features that allow patients to access 24/7 medical and community support via SMS and WiFi connectivity. It’s also compatible with other available ‘smart’ health devices, and offers users a variety of health and well-being care modules, including solutions, among many others, for exercise, healthy eating and vital signs monitoring. 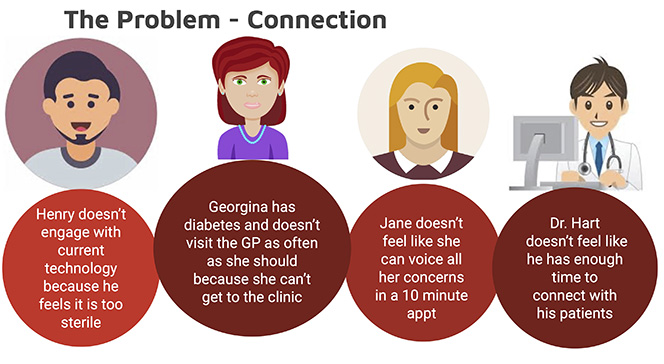 Like Gareth, Kim also values her nursing studies as a conduit to other disciplines and modes of thinking. “As a nursing student, I work with other students from different backgrounds such as medicine, engineering, business and technology. This helped my team to take a wholistic approach to the use of technology within the general practice of the future.”

Anna Richardson concluded by saying “The idea of “Digital Doctors” is to enhance interprofessional collaboration and clinical decision-making, and I was very impressed that students put themselves forward for this project, given the current circumstances.”