The new North Green features spaces for relaxation, contemplation and recreation, and was officially opened in Spring 2017.

A memorial garden, a sculpture and a mini basketball court are highlights of the exciting project developed by Align Landscape Design and Ara project managers.

The North Green is located in front of the new Te Kei Building and borders Tōrea & Tāwhaki (N&S blocks), Ihutai (U Block), Taipari (T Block), and the Rakaia Centre (ALX). It’s the first stage of the Campus Development Project at the Ara City Campus, which involves landscaping and wayfinding signage to create more inspiring campuses.

Attractive spaces have been created with feature lighting, native planting, clear access routes and timber seating. The next stage is South Spine, adjacent to the new Kahukura, which is scheduled for 2019 – 20. 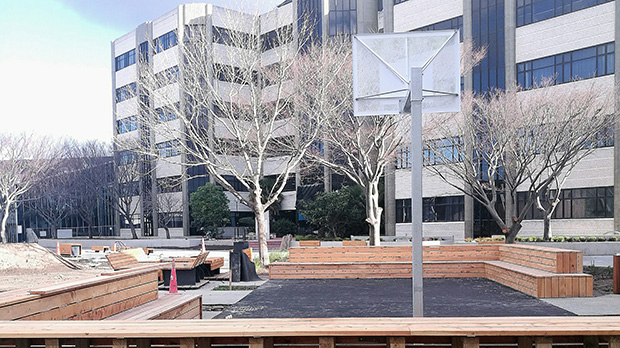 Recreational use was high on the agenda along with safety; there is a basketball area to encourage students to be active in their breaks, outdoor furniture and lawns for relaxing with friends and a flexible staging area that will be used for bands and performances.

Ara is fulfilling its commitment to replace the memorial element of Memorial Hall, which was badly damaged in the Canterbury Earthquakes.  Julie Humby our Art Curator travelled to Napier to check on the progress and quality of the laser cut designs prior to these being prepared for transport. The designs have been cut from Corten steel and will undergo a month long conditioning/weathering process before being assembled and transported to Christchurch.

A fourth student design, ‘Letter to Mother’ depicted an actual hand written letter from a soldier to his mother was greatly liked, but unfortunately unable to be used, due to the requirements of the steel cutting process and compromises that would have needed to be made to the final design

The assembled Corten steel panels form pillars that have been incorporated in the new North Green. The memorial pillars, which will be lit from above, were installed late November 2017, with a blessing and unveiling in conjunction with the RSA in early 2018.

This space is for contemplation to honour the memory of those past students and staff members who gave their lives in the service of their country.

Art & Design students along with Ara alumni and artist Dallas Matoe contributed the designs, which will be cut out of six weathered corten steel pillars. 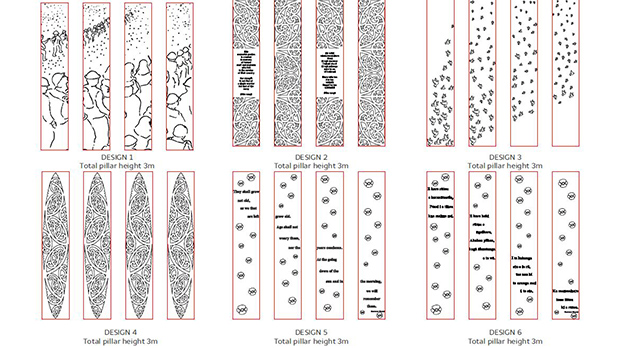 Jasmine features through the garden to create a pleasant environment, and to fulfil a commitment to an accessible campus that caters to Blind and Deaf students through the sensory channels of smell and touch.

The carved honour board of those who died in the wars, which was refurbished and re-gilded for the centenary of the Christchurch Technical College (now Ara) in 2006, is now proudly displayed in the Rakaia Building at Madras Street. The memorial plaques that were in the former Memorial Hall were returned to the RSA and incorporated into a centenary memorial. 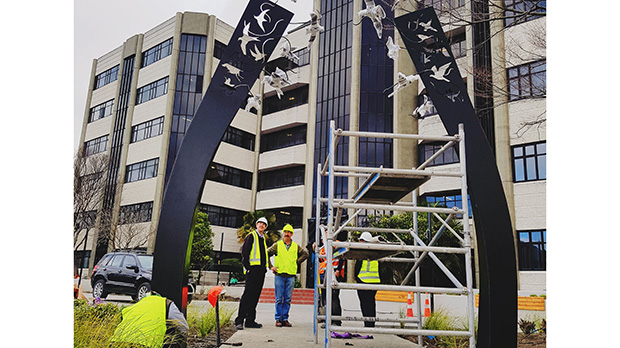 Continuing in the spirit of Dawe’s series A Landscape With Too many Holes, the work features two four metre high towers that curve skywards to form an arch. At the top of the towers, shapes of birds will be cut out and suspended alongside, as if released. The forms are recognisable as wrybill plover, the black-billed gull, the South Island pied oyster-catcher, the banded dotterel and the pied stilt – all listed as endangered or critically endangered.

“The more we are aware the more likely we are to participate in initiatives to prevent this decline,” Dawe says. 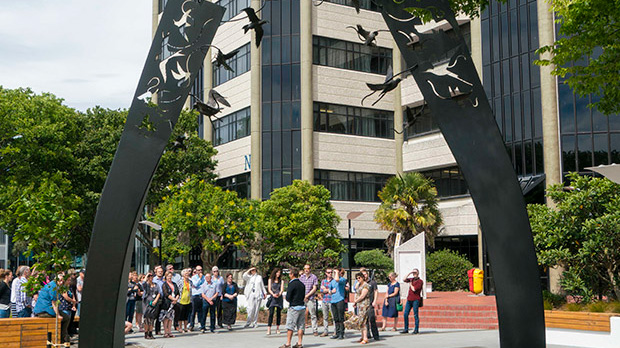 At the official opening for Bing Dawe’s artwork "Diverting. Defending. Birds over the Waimakariri."