In a strange twist of fate, nursing graduate Daniel Prior has started his nursing career in the very same hospital ward that inspired him to become a nurse in the first place. 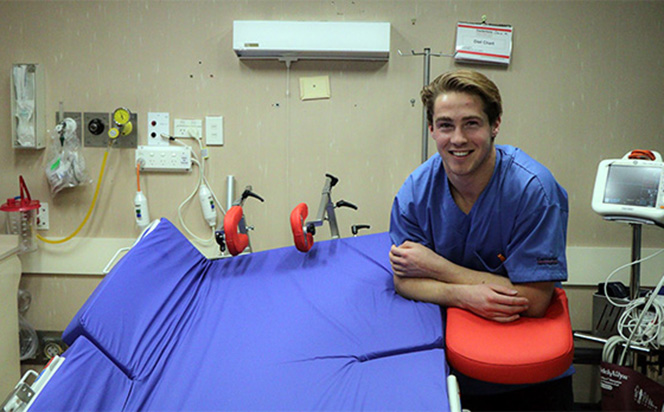 When he was 15, Daniel had a mountain bike crash that landed him in Ward 19 of Christchurch Hospital with a fractured femur, tibia and fibula. He required four hours of surgery and spent a week in the acute orthopaedic ward.

“It was a scary, confusing and traumatic experience for me at times but it was made much easier for me and my family because of the care and support of the nursing staff on the ward,” he says. “I looked up to them so much and became inspired to be like them. I thought if I could be half as competent as them, and if I could have a positive influence on other people’s lives, then I would feel pretty fulfilled in life.”

Motivated by this experience, Daniel enrolled for the Bachelor of Nursing at Ara when he finished high school at St Andrew’s College. He chose Ara because he wanted to remain in Christchurch but when he looked into it further, he realised that the training and facilities at Ara weren’t just convenient, they were world-renowned. “I knew that by studying at Ara I’d be well-prepared for when I gained my registration and started my first job.”

Daniel says the degree programme was immaculately structured. “Classes and lectures in each paper were set out systematically to follow on from, build on and relate back to previous learning. They also corresponded perfectly with what we were writing about in assignments, which helped a lot. There was a lot to learn before starting each placement but I always felt prepared with the necessary knowledge to practice safely.”

In such an intense learning environment, it’s not surprising that Daniel made many friends among his fellow students. “I formed some of my closest relationships with people that I trained with, and it may sound clichéd, but there were times when I really felt like we were more family to each other than classmates.”

Daniel has high praise for his tutors too. “Some of them became prominent role models for my own nursing practice and occasionally I’ll use their phrases or methods of teaching when I work with students who are on placement on my ward.”

That ward is Ward 19 at Christchurch Hospital where he works as a registered nurse alongside many of the nurses who looked after him following his mountain bike accident. His focus is on developing his practice as much as possible. “My overall plan is simply to be the most knowledgeable and competent nurse that I can be by exposing myself to new experiences and by never being complacent or ceasing to learn.”