Fifteen years of work in disability performance, which has put Christchurch at the forefront of research and practice in a growing global movement, has culminated in the publication of a new book for Ara theatre tutor Dr Tony McCaffrey. 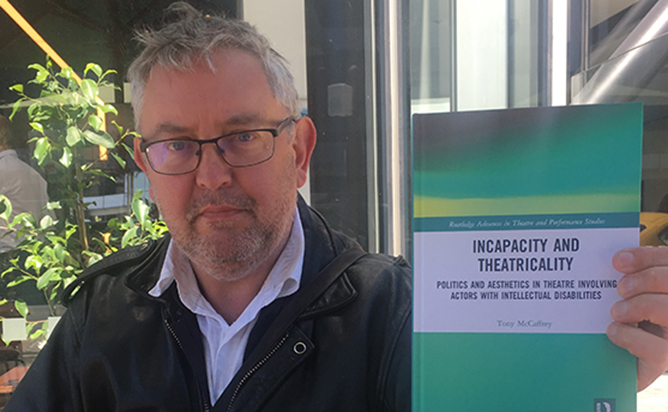 Dr Tony McCaffrey with his new book that explores the recent history of disability performance; a form of performance whose time has come, he says.

McCaffrey established the company A Different Light, an ensemble of performers with intellectual disabilities, in 2004 and has since contributed to an international network that is challenging assumptions about theatre, about disability and about what it means to be an inclusive society.

“Writing the book was to really acknowledge the contribution that actors with intellectual disabilities are making to contemporary culture on a global basis,” McCaffrey says.

“It is a form of theatre whose time has come. After 50 years of institutional and therapeutic origins, disability theatre has entered the mainstream, and a network of innovative companies has emerged globally with one of the centres here in Christchurch.”

McCaffrey’s book Incapacity and Theatricality: Politics and Aesthetics in Theatre Involving Actors with Intellectual Disabilities, is published by Routledge and offers a recent history of key global theatrical performances across different media involving performers with intellectual disabilities. From the 1963 Judy Garland and Burt Lancaster film, A Child is Waiting, featuring young actors with intellectual disabilities to McCaffrey’s own work with A Different Light, the book shows how attitudes are changing.

“I think there is quite a lot of interest in the involvement of people with intellectual disabilities in performance. One of the actors I work with in A Different Light just auditioned for a New Zealand film called Poppy, directed by Linda Niccol, which is about a young woman with Downs Syndrome.” 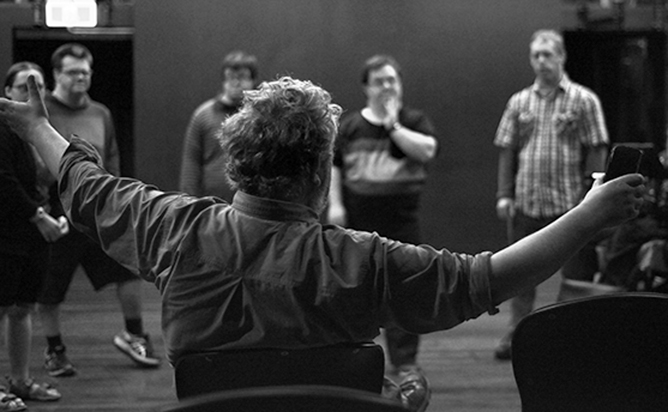 Dr Tony McCaffrey directs A Different Light theatre ensemble, which he founded in 2004 at Ara.

McCaffrey also talks about “the disability that is to come” as the population ages, such as dementia for example. “We have to make a decision as a society, either we look after people and help them to communicate with us - or we don’t. That is the choice and obviously I am on the side of talking, working with and engaging people who have whatever incapacity they have in their lives, but often that incapacity can open up tremendous new possibilities of what can be done.”

The examples in the book show that apparent limitations can create exiting new creative possibilities. The first intellectual disability performance at the Sydney opera house in 1980 by Aldo Gennaro, the collaboration between avant garde director Robert Wilson and autistic poet Christopher Knowles, French choreographer Jerome Bel’s ambitious Disabled Theatre with Theater HORA from Switzerland – all these and more have broken new ground. 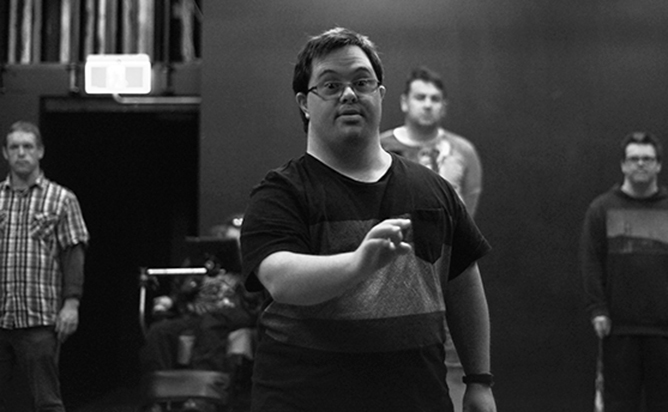 A Different Light actors in rehearsal. Company members have presented at international conferences and performed in Christchurch and around the world.

As McCaffrey continues to present at global conferences, work with leading academics/practitioners and contribute to distinguished academic journals, his work is shining a light on many grey areas of disability theatre, beyond simply having opportunities to perform, to leadership and agency. Who devises the work? Who runs the company? What sort of support is required?

“The performers from A Different Light are very articulate, they have spoken at academic conferences, they make theatre and they devise the scripts. A Different Light in Christchurch, Mind the Gap in England, Back to Back Theatre in Australia - these are avant-garde theatre companies that we can now say just happen to have performers with intellectual disabilities in them.”